The eight-year-old English Channel gelding completed the 1-3/4-mile marathon in 2:57.67 for trainer Kevin Attard and owners Al and Bill Ulwelling.

"For you to be successful, you need to hang around people like Kevin,” said Da Silva. “I've been very lucky to ride for all these great trainers, great horsepeople, great owners, and when you are together with them, all you are doing is winning." 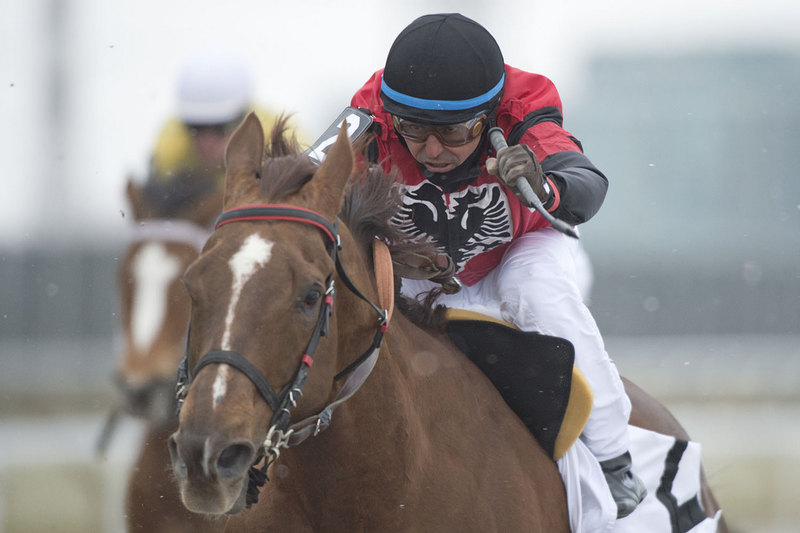 Jockey Eurico Rosa Da Silva in action during the final card of his career on Sunday at Woodbine Racetrack, Michael Burns Photo

Da Silva settled Pumpkin Rumble mid-pack and improved to third-place down the backstretch the second time before closing three-wide to take the lead in the final turn. Fearsome and Theregoesjojo came on to finish second and third, respectively.

"He's a super, super easy horse to ride,” said Da Silva. “He has a little soft mouth. You give him a chance to relax and you can do anything you want with him. Like you see today, I had a little bit of trouble relaxing him in the beginning, but once I tucked in behind, he was so relaxed. At the three-eighths, I really did not want to take the lead there but, you know what, he said 'Eurico, I'll handle this' and he took over. From there, it was over.”

Of course, Da Silva concluded with one final statement: “Good luck to everybody!"

Pumpkin Rumble, who last raced on October 12 in the Grade 1 Pattison Canadian International finishing fifth, was sent postward as the 4-5 favourite and paid $3.50 to win.

“He's coming out of the International and when the prep failed to fill, I thought ‘wow, it’s going to be a couple months [between races],’” said Attard. “We gave a good mile work into him and the exercise riders, Nikki Alderson and Robert Stuart, who joined them at the half-mile pole, did a great job. I think that was a big benefit to get him ready and just keep that fitness in him. He's an older horse and older horses usually look after themselves.”

Attard said the 11-time career winner, who got a late start to the 2019 season, will head south to race in Florida this winter.

Da Silva, who first won the Woodbine jockey title in 2010, led all jockeys for the fifth straight year winning 182 races at the 2019 meet. Da Silva recorded 19 stakes wins in his final Woodbine season and topped the standings for earnings with his mounts banking more than $9.8 million. He finished the season with an 18-win lead over Rafael Hernandez (164 wins) while Kazushi Kimura rounded out the top three with 146 victories.

Norm McKnight took the trainers title for the third consecutive year with his stable sending out 103 winners during the 2019 meet, which ran from April 20 to December 15. Hall of Famer Mark Casse, who won 92 races, was the leading money-earning trainer with his stable amassing more than $6.7 million in purses. Martin Drexler edged out Kevin Attard for third-place in the win column (63-61).

Chiefswood Stables was the leading money-winning owner of the meet with more than $2.3 million in purses and, with 28 wins, was runner-up to Bruno Schickedanz, who topped the standings with 54 victories.

Woodbine’s 2020 Thoroughbred meet is scheduled to begin on April 18.